Much has been penned about the millennials, the generation of 80-million-plus young folk who now outnumber their baby boomer parents and whose retail spending power is projected to hit $1 trillion in the next five years.

Companies are falling all over themselves to figure out how to keep them happy at work, why they don’t go to church, how they consume news and, most crucial to jewelers, how to market to them.

But, when one gets down to it, millennial-aged consumers really aren’t that different from many members of Generation X or even their baby boomer parents.

A 2013 study by Accenture, “Who are Millennials Shoppers and What Do they Really Want?,” noted as much. After interviewing some 6,000 consumers, 1,707 of whom were millennials, Accenture outlined three myths about millennials, including this one: It’s all about online shopping.

Millennials will buy online, yes, but so will almost everyone else. The ability to buy online doesn’t mean that everybody under 35 never sets foot in a brick-and-mortar store; shopping remains, as it has been for generations, a social activity.

Accenture isn’t the only one coming around to the idea that maybe the millennials aren’t so strange after all.

Austin, Texas-based Jason Dorsey has created an entire company around dispelling myths about millennials. The 37-year-old’s Center for Generational Kinetics helps companies that want to reach the younger crowd understand them in terms of their similarities to, and differences from, previous generations, instead of viewing them as strange, exotic creates we’ve somehow managed to capture in a glass box and must study because we don’t understand them.

What he has found is that, like the generations before them, millennials do like jewelry. They have a desire to own fewer, better things, and jewelry fits the bill.

“What they like, though, is jewelry that is increasingly unique, has a story behind it. They really like when jewelry has a local connection,” he says.

That matters more to them than having something that’s bigger and better than their friends. As one millennial National Jeweler spoke with put it, “I don’t feel like there’s as much pressure to get a giant diamond on your finger.”

That’s why custom jewelry is such a draw for this crowd.

Here are three more insights on millennials, garnered from the Accenture study, Dorsey and National Jeweler’s own interviews with young shoppers.

♦ It’s got to be in stock or they’ll go elsewhere. This is true of many shoppers today, whether they are 25 or 65. If a consumer wants something today and it isn’t on the shelf, they’ll go home and Google until they find it.

♦ Millennials are buying jewelry in some novel places. Ever think of taking a booth at the local flea market or farmer’s market, or bringing an Etsy designer into the store? Jewelers who haven’t might want to consider it because these makeshift markets are attracting a young, hip crowd these days, especially in urban areas.

♦ Social networks matter, but not just those found online. Nothing in the world has ever been as powerful as word-of-mouth marketing and nothing ever will be. Millennials take their style cues from what they see on Instagram, but they also look at what their friends are wearing and trust them when they say they had a good experience at a jewelry store.

Want to hear more from millennials? Read on. 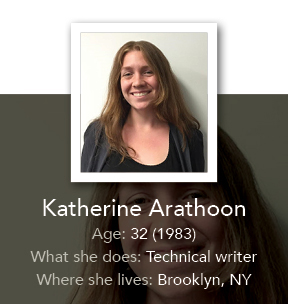 Katherine Arathoon is one of those millennials who sees herself as a blend between generations: She’s technically a millennial by birth date but feels as if she has just as much in common with her older, Generation X friends.

Katherine’s older-soul qualities quickly become apparent when speaking to her, as she likes jewelry for the same reason people have for ages.

“I love jewelry, in part, because it’s beautiful and in large part because it has sentimental value for me,” she says, adding that it allows her to channel energy of those she loves.

With the exception of Etsy and the Sundance catalog, Katherine, like many of the other millennials we spoke with, likes to try on jewelry before she buys it so she generally doesn’t shop for it online. (Interestingly, this same mentality doesn’t apply to clothes for her.)

But that doesn’t mean she’s running out to the nearest Zales or Tiffany store; in fact, she mentioned both specifically as places she wouldn’t shop for jewelry because she is not into mass-market merchandise.

Instead, she turns to small boutiques in Brooklyn that curate from local designers or the Brooklyn Flea, the uber-popular urban market that sells a variety of goods, many from local vendors.

The pieces she picks up in small boutiques or upscale flea markets don’t “look like traditional jewelry necessarily.” 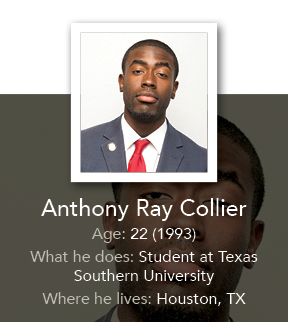 Unlike many men his age, Anthony Ray Collier wears a watch.

It is not a traditional TAG Heuer, Movado or Citizen this young man, a student and self-described social activist, wears but a smartwatch.

Anthony says he received the Samsung smartwatch as a gift from his cousin.

While he’d never been big into watches before—after all, Anthony points out, he can just look at his phone when he wants to know what time it is—he would probably buy a replacement if something happened to this one.

It’s not a surprising answer for a younger millennial like Anthony, who had computers in his elementary school classroom and was doing absolutely everything online, nary a textbook in sight, by high school.

“Everything is right at our fingertips. Technology has been a part of my life as long as I can remember,” he says.

Interestingly, though, owning a smartwatch seems to have made him appreciate watches more as a whole, just as he is preparing to transition into the working or post-graduate world and is looking for a more mature style.

A few years ago, a friend bought him a Zoo York-brand watch for his birthday but it was too big and he never bothered to take it to a jeweler to get adjusted.

But now, “I should go and get it adjusted to my wrist,” Anthony says. 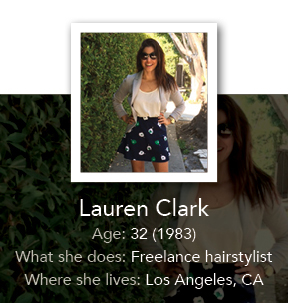 Lauren Clark’s another Etsy shopper, but that doesn’t mean jewelers won’t ever see her in their store. She is not a woman who’s loyal to a specific store or even a jewelry brand; she buys what she likes where she likes when she sees it.

Lauren once spotted a friend wearing very delicate rings, which was just the style she wanted. So she went home and Googled using just keywords and, lo and behold, she found an Etsy seller with the delicate rings she wanted.

She has purchased jewelry at an L.A. farmer’s market as well as rose gold and diamond pieces at a chain jewelry store in Arizona, splurging on something that would last yet that could be worn every day.

Lauren says when it comes to jewelry, she “won't buy cheap stuff” that breaks or turns green. She’s buying quality pieces or nothing at all; she has a definite appreciation for fine jewelry.

For now, however, the opportunities she has to purchase are just not that frequent.

Her unpredictable and uneven income as a freelance hairstylist—she prefers being freelance to having a 9-to-5 job—means her fine jewelry purchases are “very few and far between.” 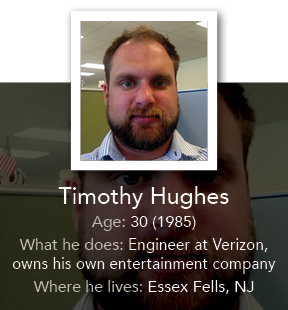 Like Accenture, Tim Hughes thinks that too much is made of how much millennials shop online.

When it came time to propose to his longtime girlfriend, now wife, Tricia, he turned to an independent jewelry store owned by a family friend. He had a good experience there and has since recommended this retailer to other friends, noting they too prefer to buy their engagement rings in person.

Why did he go brick and mortar over Blue Nile?

“I wanted to be educated on the diamonds and how they get priced. I felt more comfortable being talked through that by a person as opposed to reading something online,” he said.

“It’s the human factor, as opposed to, ‘I clicked a couple of things online.’ There was an actual relationship built that established trust.”

Tim and Tricia bought their wedding bands from a brick-and-mortar jeweler as well, albeit a different one from where he purchased her engagement ring.

He since has returned to this store multiple times to buy bracelets, rings, a necklace and anklet for his wife. He says he likes the price points and the fact that the jeweler sells mostly his own custom designs. (It’s been said many time before but bears repeating: Millennials don’t want to be wearing the same thing as everyone else.)

“I like the uniqueness of it. The problem with the Cartier (Love) bracelet is, in my area where I live, you can go to a dinner party and everyone has it. Everyone has the David Yurman bracelet or the Cartier bracelet. I don’t like when you show up to a party and you’re like, ‘Oh, that person has one too.’” 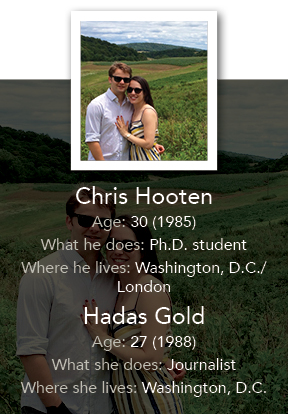 Chris Hooten was a bit braver than the average man these days when it came time to propose to his girlfriend, Hadas Gold.

While shopping for engagement rings increasingly has become something couples do together, Chris got a few hints then went out on his own, debating between the Asscher and the emerald cut.

Along the way, jewelers told him it also was important that he liked the ring and that it should be a reflection of both of their personalities. “And I liked that,” Chris said.

In the end, he selected an emerald-cut diamond that he bought online from Los Angeles-based e-commerce site Adiamor, which had positive customer service reviews, good prices and the setting he wanted in stock.

Take heart, though, jewelers. The couple seems to be leaning toward brick-and-mortar stores for future jewelry purchases, starting with their wedding bands, which Hadas plans to have custom-made using her grandmother’s diamonds.

She says as much as she loves her online-bought ring, she likes the idea of having a local jeweler for after-care and custom designs like her wedding band, while it’s other items she could see herself purchasing online, such as watches.

When it comes to custom, it’s important for the couple to be able to talk to the jeweler about what they want. “You can’t get the same feel from the person if it’s online,” Hadas says. 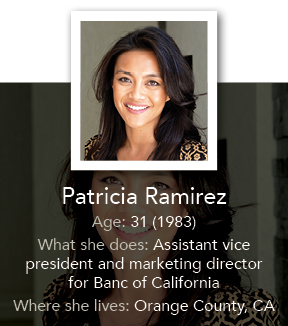 Here are the things to know about Patricia Ramirez: she prefers shopping in person to online and while she’s inspired by the designs she sees in stores such as Harry Winston and Tiffany & Co., she would ultimately turn to a friend who is a jeweler when it comes time to buy.

She also likes David Yurman jewelry and Instagram is the No. 1 social channel that informs her style, though she also finds out about brands from friends who work in fashion.

Patricia does her research outside of the store, but her purchasing in it. Retailers shouldn’t be disheartened if they see Patricia come in and leave empty-handed; she’s not an impulse buyer, and will only purchase an item if she’s still thinking about it several days later.

She says she gravitates toward delicate pieces—bulky jewelry looks “odd” on her slender, 5-foot-4 frame—and has bought sterling silver stud earrings from Tiffany in the past, as she says it is a brand that matches her style: simple, timeless and classic.

While a prolific gift-giver, she is not a huge self-purchaser. Most of the higher-end pieces she has were gifts from former boyfriends, purchased using the help of a few hints of course.

“It’s a very thoughtful gift. I’ve received jewelry from all my long-term boyfriends and always at a significant milestone.

“I do appreciate jewelry,” Patricia reflects. “It’s definitely one of my top gifts to receive.”